Home/Baron Von Buchenroder a man of violence
Previous Next

Baron Friedrich von Buchenroder was a German nobleman, and great great grandfather of Louis Leipoldt, whose family belonged to the nobility of Hesse-Darmstadt, and has been extinct for about forty years. He had served in the Dutch army, and came to the Cape in 1803 as ex-major, with the intention to establish new settlements for the development of the colony, a scheme which was supported by a group of Dutch businessmen under the leadership of Gysbert Carel van Hoogendorp. He landed at Cape Town on May 22nd, accompanied by his family and thirty-five farm-labourers and artisans. From September 9th till November 20th he made an expedition along the east coast of the colony as far as Plettenberg Bay for the purpose of selecting suitable places for settlements; a request for permission to undertake a similar reconnoitring expedition along the west coast was refused by the Council of Policy. (B.R.4,pp.267711, BR.5.,p.25).

Buchenroder proposed to establish new settlements on the Kaaimans River and on the Keurboom River, at Plettenberg Bay and at Mossel Bay; but his proposals were rejected by the government. (B.R.53,pp.245 ff, B.R.9,pp.3620ff). Governor Janssens had not been disinclined to support Van Hoogendorp’s colonising scheme when it had been discussed in Holland; but he had changed his mind, since he had been in South Africa, having realized that there was no chance for Van Hoogendorp’s projects to be carried out with success. Nor did he think it advisable to found more settlements on the east coast of the colony, because they might in case of war serve the enemy as bases for an attack on Cape Town. (B.R.9,pp.3630 ff). Moreover he considered Buchenroder as unsuitable for his task. He had known him in Holland, and had found that he had never made a success of whatever he had promised and undertaken, owing to his lack of knowledge. (B.R.9,pp.3645).

This unfavourable opinion of Buchenroder’s personality was shared by a member of the Council of Policy, R. G. van Polanen. He declared that Buchenroder was a man of a turbulent and violent temper, which often rose to an unbridled rage. Such a man would always be a danger, especially when he found himself in precarious circumstances and disillusioned in his fantastic expectations; he was all the more dangerous in a colony where some inhabitants, dissatisfied with their living conditions, and with the government, were already inclined to be incited to rash actions. It would be very unwise to allow a man like Buchenroder to settle at a great distance from Cape Town where he would not be under the direct and continual surveillance of the government. He had already, on his expedition, given cause for alarm among the colonists by his extravagant pretensions, and might further cause unrest among them, and disturb the peace which had only lately been restored.

Besides, the brutal ill-treatment of his wife and children and of those who were in his service, of which he had made himself guilty, was further evidence that Buchenroder was totally unfit to be the head of a settlement. Whatever he would undertake was sure to turn out a failure.

Van Polanen’s memorandum was laid before the Council of policy in the meeting of 29.8.1804, and it was resolved to order Buchenroder to leave the colony. (B.R.75,pp.I73 ff).

Buchenroder left for Holland in September 1804 in the American ship “Industry”. (B.R.56,p.395). Immediately after his arrival he lodged a complaint with the Dutch government against Janssens and De Mist; and in 1806 he published two accounts of his activities and observations in South Africa: “Reize in de Binnenlanden van Zuid-Africa gedaan in den Jaare 1803”, and “Beknopt Berigt nopens de Volkplanting de Kaap de Goede Hoop …”, both printed at Amsterdam at his own expense.

According to Theal (History of South Africa since 1795, vol. I, p.137) Buchenroder returned to the Cape and settled near Algoa Bay; but actually he was prevented from coming back by the outbreak of the war between Holland and England, and died in Holland. (“The Feldhausen Tomb” in The Cape Argus of 9.1.1937). Theal in his statement evidently identified him with his son Wilhelm Ludwig. (See below).

The baron’s family did not return with him to Europe, but remained at the Cape. It consisted of his wife, Frederika Charlotta Louisa Johanna, born Meyr, of Hanau in Hesse, and three children: Wilhelm Ludwig, Friedrich, and Maria Theresia Wilhelmina Eleonora. Baron von Buchenroder’s marriage was not so romantic and happy as legend would have it. (See “Old World Tale of Romance and Tragedy” in Magazine Supplement of The Cape Times of 21.7.1934). In 1803, shortly after the arrival of the family, the baroness applied to the Council of Justice for veniam agendi to get a divorce. She declared that her husband ill-treated her, and that she had been separated from him for eight years, from 1795 till shortly before their departure for the Cape; that she had during that period received no means of subsistence from him, neither for herself nor for the support and education of her children. She added that, in case her request could not be granted, she wished it to be kept secret, because otherwise it might have fatal consequences for herself and her children. At the same time her daughter applied to the Council of Justice for permission to stay with her mother pending the divorce case, declaring that she wished to make life for her unhappy mother as tolerable as possible by her filial devotion and obedience. Both requests were granted. (Requesten CJ 2547). 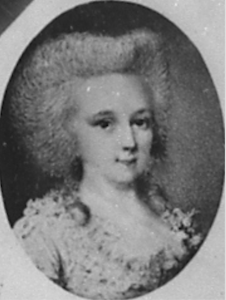 In 1804 Friedrich, the baron’s younger son, appealed to the Council of Justice for protection against the “ill-treatment by an unnatural and dangerously hot-tempered father.” He declared that his father’s brutality had reached such a stage that he had been compelled to leave his parental home on the Zwart Rivier and to seek refuge in Cape Town, and asked permission to stay there under the protection of the Council of Justice, till his complaint against his father had been dealt with. (Request of 17.6.1804 in Requesten CJ 2548).

The baron’s repatriation released his wife and children from the tyranny of a brutal husband and father.

Von Buchenroder’s daughter was born at Hanau and married at the Cape Johann Balthasar Christian Knobel, who is said to have been a baron, and who had accompanied the Buchenroder family to South Africa. Knobel was secretary of Uitenhage from 1810 till the end of 1812, sworn surveyor for the districts of Uitenhage and Graafl-Reinet from 1813 till 1822, surveyor-general for the Cape Colony from 1822 till 1828; afterwards he practised as surveyor in a private capacity. As secretary of Uitenhage he was praised for his work in connection with the Commission of Circuit for the Districts of Graaff-Reinet, Uitenhage and George. In his report of January 1813 the chairman of that commission, P. L. Cloete, remarked: “The undersigned cannot avoid doing justice to the former Secretary of Uitenhage, Mr. Knobel, by saying that of all the districts visited by this Commission the information collected by him were drawn up with more attention and judgment, and better calculated to answer the proposed intention than any of the others, a new proof that nothing but zeal and application are wanting to attain capability in a line in which one has not been brought up. (Theal, Records of Cape Colony, vol.IX,p.58).

Knobel died on February 20th 1853 at the age of about 70, leaving only some movable property worth about £40, and was survived by six of his seven children: August, Elisabeth, Johann Ludwig, Johann Balthasar, Johanna Henrietta, and Catharina Wilhelmina. Knobel’s wife died on March 3rd 1827 at the age of 40 years, 3 months, and 7 days (Death Register, Cape Archives), and was buried on the farm “Feldhausen.” The baroness von Buchenroder died four years later at Wynberg, where she lived with her son-in-law, in her 71st year. According to her wish she was buried in her daughter’s grave. The double tomb, a large plain stone structure- –restored by the Knobel family in 1949 – is still preserved in Feldhausen Road, Claremont.

Wilhelm Ludwig, the baron’s eldest and only surviving son, is mentioned in 1805 as lieutenant in the Hottentot Light Infantry. (B.R.11,p.1143). He was witness of the earth-quake at Cape Town in December 1809, and gave an account of it in the “South African Quarterly” for 1830. (See “Africana Notes and News”, Vol.VI. Nr.2,p32 ff). Later he lived as a merchant in the Uitenhage district, where he had two farms, “Perseverance”, situated “aan Zwartkop Riviers Wagendrift, Veldcornetschap Zwartkops Rivier, Uitenhage”, and “Coega” or “Amsterdam Flats”. (MOIB 2/550, MOIB 2/240 nr.48b)

Latrobe was his guest in 1816; on April 7th he entered in his journal (“Journal of a Visit to South Africa”, 2nd Edition, London 1821, p.298): “We drank tea with Mr. Von Buchenrode, a German gentleman residing here as a merchant. He willingly rendered us every service in his power, and indeed it was well that we found such a generous friend at Uitenhage, where as yet little is to be had, either for love or money. Mr. Knobel, the surveyor, joined us and we spent the afternoon in pleasant conversation.”

On the following day Mr. von Buchenroder invited Latrobe and his party to dinner, and Latrobe was delighted to meet again Mr. Knobel, who turned out to be “an excellent performer on the piano-forte and flute.” As Latrobe himself was a man of no mean musical talents (see Dictionary of National Biography) they spent two or three hours in playing Haydn’s and Mozart’s duets, to the great pleasure of their listeners. “Little did I expect”, says Latrobe, “to have such a treat in this distant corner of the earth.” (Op.cit.,p.299).

Wilhelm Ludwig von Buchenroder also worked as a building contractor. He built the secretary’s house (letter of J. G. Cuyler of 6.5.1814 in C.O.2592) as well as the drostdy and the messenger’s house at Uitenhage. (J. L. M. Franken, Pirt Retief”, p.84, where Buchenroder’s Christian names are given as H.L. and he is identified with his father). He also tendered for the erection of a church at Uitenhage, but his tender was not accepted, because it was considered too high. (Letter of Buchenroder to J. G. Cuyler of 3.3.1814 in C.O.2592).