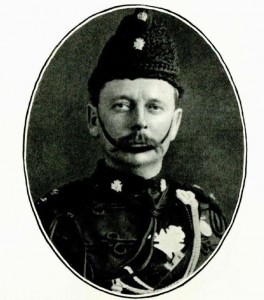 Henry Benjamin Shawe was born in Clanwilliam in 1864, receiving his education at the Clanwilliam Public School.

He was the assistant Under Colonial Secretary for the Cape, and Lieut.-Colonel of the P.W.O.R., Cape Peninsula Rifles. He was the son of the gallant Captain Shaw, who was a firm old Colonist, and one of the 1820 Settles killed in action while fighting in the Gaika-Galeka war of 1877 – 1878, and was also a Member of the House of Assembly for Clanwilliam for many years.

In 1883 Mr. Shawe entered the Civil Service, and was almost immediately transferred to the Colonial Secretary’s office, holding many responsible positions until eventually, in 1902, became the Under Colonial Secretary. For many years he has been an enthusiastic volunteer, and has served four years in the D.E.O.V.R. and subsequently the Cape Town Highlanders, and during the Anglo-Boer War was the Paymaster to the Colonial Volunteers until the organisation of Army Pay Department, which subsequently performed the work. Mr. Shawe then volunteered for service with the Western Province Mounted Rifles, but was unable to obtain permission to leave his civic duties, much to his regret.

He was also formerly and ardent oarsman and was a member of the Table Bay Rowing Club and the Civil Service Rowing Club, and had one trophies at the various races held in the Peninsula.

Mr. Shawe was also Chairman of the Junior Civil Service Club and on the committee of the Civil Service Supply Association and was universally liked by the Cape Officials.