The Scots in South Africa

The Scots in South Africa 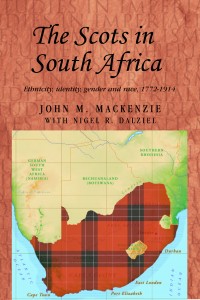 Authors John M. MacKenzie and Nigel R. Dalziel epitomises their version of the Rainbow Nation with the vast array of Scots men and women who made South Africa their home. Their bright and cheerful clan tartans are a clear and defined representation of one of the original colours of our Rainbow Nation.

This publication makes easy reading for both the professional as well as the novice historian. This complete extended study accentuates the relationships the Scots had with the people of Africa

Fascinating facts from early Scots Brothels shortly after Van Riebeeck arrival is an unexpected find as well as the Scots virtually saving the Dutch Reformed Church from virtual collapse and at one time preaching in some of the DR churches and being accepted by the Dutch Reformed Pastors as much as their own.

Wonderful anecdotes abound on how people like the Moodie brothers were particularly fond of fond of the Khoi Women. The Scots wild parties and drinking bouts were apparently appreciated by the Khoi. Equally so, the Scots’ passion for music was admired, unlike that of the Dutch women, whom John Moodie described as clumsy and unmusical.

Chapters on professionals in the environment, medicine and business radicals provide a wonderful background into the lives of many prominent Scots including surveyors, engineers, builders, botanists and foresters as well.

By the late 18th and early 19th centuries Scottish Universities were over producing – thus the prospects of jobs was not easy and the climate on the  Cape Frontier was an attractive alternative as the harsh living conditions in the Cape would be a good match for the Scots – and so they came.

The Scots in South Africa is long overdue publication – with the increasing and growing demand for information hobbies like Genealogy and Ancestry has increased tenfold and the need for more resource material has been inevitable. The magnificent references of material researched in this publication opens up a complete new bonus of resources and references that the local genealogist and family historian are probably unaware of.
Product details