How Grahamstown got its name

How Grahamstown got its name 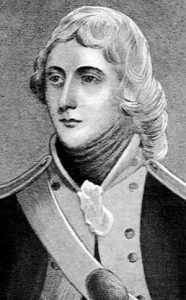 John Graham was born on the 24th July 1778 in Dundee Scotland. He was a British officer and the second son of Robert Graham, the last laird of the Fintry demesne and twelfth representative of the Grahams of Fintry in Forfarshire, north of Glasgow, and his wife, Peggy Milne. His old and noble family was descended from the first Duke of Montrose, and, originally, from Sir William Grame, laird of Kincardine in the early fifteenth century.

As a lieutenant aged sixteen, he joined the 90th Regiment, which had been raised in 1794 by his kinsman, Thomas Graham, of Balgowan (the later Lord Lynedoch). In 1795 he left, at the head of a detachment, for an Island on the French coast, but poor health caused his return to Britain in 1796. Later he served under Colonel Graham, of Balgowan, and in 1799 went to Toulon with Earl Hood’s expedition. In the same year he was appointed aide-de-camp to the Earl of Chatham, and left for Holland in September. From October 1800 he served with his regiment in Guernsey, until he was sent to Ireland in 1803, where he became assistant quartermaster-general. In January 1806, as a major in the 93rd Regiment, he took part, at the battle of Blouberg, in the British conquest of the Cape.

He was given the task of establishing the Cape Corps (also known as the Cape Regiment, Hottentot Regiment or Hottentot Light Infantry), using members of the Hottentot Corps founded in 1804 during Gen. J. W. Janssen’s administration. This regiment, of which he assumed command on 26th January 1806, as a lieutenant-colonel, was to play a very important role in the Fourth Frontier War (1811-12). Until then the regiment was based at Wynberg Military Camp, and was formed by John Graham into a light infantry unit which was to render outstanding service in wooded terrain.

Because of the conditions on the eastern frontier caused by the presence of Xhosa tribes in the Suurveld, west of the Great Fish river, the governor, Sir John Cradock, appointed him a special commissioner for military and civil affairs in the eastern districts (8th October 1811). The conscripted burghers of the Swellendam, George, Uitenhage and Graaff-Reinet districts, his own Cape regiment of 594 men, and a few hundred troops from other units were placed under his authority as commandant-general. His orders were to allow the Xhosa to cross the Fish River in peaceful fashion, failing which effective means were to be employed to drive them within their frontiers. In a dexterous and soundly conducted offensive, Graham, employing three columns simultaneously, showed his quality as a leader and his military talent, bringing the Fourth Frontier War, which had begun in December 1811, to a successful conclusion early in March 1812, and establishing cordial relations with the burghers, for whom he had high praise after the war. He also professed the greatest esteem for the military ability of his own Cape Regiment, which had fought under white officers.

Immediately after the war he advised Cradock to prevent the return of the Xhosa by erecting a line of military posts along the Fish River from the sea to the second interior mountain range.

On 30th March 1812 he gave detailed instructions to the commander of the military posts that had been temporarily established. Lucas Meyer’s deserted loan farm, De Rietfontein, was chosen by him and a youthful ensign, Andries Stockenström, as the headquarters of the Cape Regiment. A government notice of 14th August 1812 named it ‘Graham’s Town’ (now Grahamstown) in Graham’s honour, and the deputy landdrost of the district of Uitenhage was installed there. His efforts to prevent the return of the Xhosa formed only part of his proposals for the restoration of peace and order in the Suurveld. On the 20 March 1812 he had circularized the landdrosts, telling them to encourage the return of the former inhabitants of loan farms abandoned due to the war, so that a denser white population might be established. Cradock withdrew these measures, because he wanted to abolish loan farms and populate the Suurveld more thickly through another system of land tenure.

On 24th July 1812 John Graham had married Johanna Catharine Cloete (1790-1843), third daughter of Roedolph Cloete (1762-1816), of Westervoort (Great Westerford) in Rondebosch, son of the first Hendrik Cloete, of Constantia. They had a son and three daughters. After his brother’s death (in 1799), Graham was next in line as representative of the Grahams of Fintry, becoming the thirteenth representative in 1816, when his father died. His only son, Robert Graham, a later civil commissioner of Albany, was the fourteenth, while his grandson, Sir John James Graham, was the fifteenth. Another grandson was Sir Thomas Lynedoch Graham, the politician and judge. Throughout his life he remained a poor man, all that he earned going to support his parents and nine unmarried sisters. One of these, Helen Christian Graham, married Adv. Hendrik (Henry) Cloete in 1816.

Graham left the eastern frontier, where his exacting duties had sapped his strength, in the middle of September 1812 and that same year he and his wife visited Britain, where he was offered the opportunity of again serving under his former commander, Sir Thomas Graham. Once assured that his interests at the Cape would not be adversely affected, he accompanied Sir Thomas to Holland in October as his military secretary and first aide-de-camp.

In January 1814 he was promoted to full colonel and on 8th March 1814 he took part in the British attack on Bergen-op-Zoom. On leave in Britain in May 1813 Graham proposed that 500 Highland crofters be found to settle in the Suurveld, where they could help to defend the frontier. But at this stage there was no official response to his proposal. On his return to the Cape in 1815 he found that sweeping changes were taking place under the regime of Lord Charles Somerset. His earlier post in the eastern districts had been abolished, while the Hottentot regiment which he had originally commanded was disbanded in September 1817 for later re-organisation. He therefore accepted the post of commandant of Simon’s Town, a reasonably important position that he held until his death.

On 13th October 1820 the acting governor, Sir Rufane Donkin, appointed him the first landdrost of the new district of Albany, but failing health prevented his assumption of office. He died aged forty-two on the 17 March 1821 in Wynberg and was buried in the Somerset Road Cemetery, Cape Town. This graveyard was later cleared away, so that the grave no longer exists; the fate of his tombstone is unknown. An unsigned portrait in oils of John Graham as a lieutenant in the 90th Regiment was in the possession of Judge J. Graham, of Grahamstown in 1965, and has been reproduced in the Cory Library. There is a statue of Graham in the Cathedral of St Michael and St George in Grahamstown, while the Africana museum, Johannesburg, has a pencil and wash drawing, by F. T. I’Ons, from a draft for a Graham memorial (bearing his profile), which was to have been erected where the thorn tree, under which the decision to establish Grahamstown was taken in 1812, had stood. It was only in 1912 that a monument of this nature was set up to commemorate ‘Graham’s tree’.

Contact me if you need help with your family tree.