Home/Shipping and Passenger Records in South Africa
Previous Next 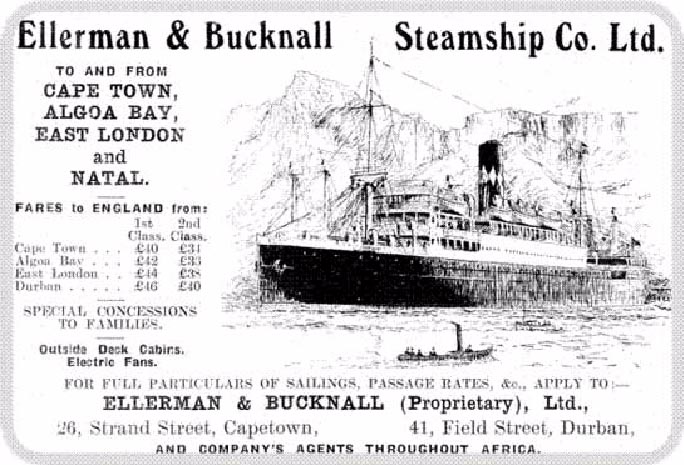 The National Library in Cape Town also they hold passenger lists which were printed in daily newspapers under the shipping intelligence section.

Newspaper shipping columns are by far the most accessible but it is a long and tedious task. If you are not sure what ship someone arrived on during a particular period, then more than up to 52 newspapers of the Cape Times will need to be searched.

Most of the original shipping registers are non-existent thus the newspaper records are inaccurate and incomplete.

Passengers in steerage or “economy class” are not listed and those that are no initials are given to classify any person.

However these passenger lists are guidelines and cannot be assumed as 100% correct. On many instances only initials and surnames are given, sometimes only surnames are given and titles and children were sometimes listed as “and 2 children” or “governess and baby boy” or simply 200 passengers and no names at all are mentioned. Many times surnames and names are miss spelt, passengers also sometimes never embarked or their ticket was used by someone else and the names were not changed or they used a pseudonym name to escape some form of family or criminal predicament. On occasions where Saloon passengers were listed the rest of passengers would be a simple number.

Generally first and sometimes second class passengers are mentioned, but steerage passengers and the so-called “economy calls” which were the majority on board – were seldom listed. Military regiments travelling by sea were usually listed as the regiments with its principal commanding officer only being named.

When unassisted or private individuals are listed generally only surnames appear unless they had a title such as doctor, Sir, Lady etc. Single women or unaccompanied people were listed either as Miss, Mrs. or Messrs. This does complicate researching when looking for the run of the mill surnames. Children too were treated as subordinates and where not mentioned and just listed as “and 4 children” or “master Wood”.

Records to be searched at the Cape Archives are the Registers of Arrivals and Departures of Ships, Algoa Bay 1846-1901 which are held under Reference CC which means the Archives of the Secretary, Cape Town Chamber of Commerce. These registers however give the captain’s name and sometimes the first class passengers only. Another good source is the Public Works Department PWD Volume 2/401 which holds passenger lists for 1872-1884.

In London at the Public Records Office in Kew, the reference BT 27 is the one to search for outbound passengers of 1890 to 1960. This documentation supplies the names of persons sailing from English harbours with the final destination being outside of Europe and the Mediterranean . To use these records the researcher must have some knowledge or approximate date of departure and the port to have any reasonable hope of finding a passenger’s name. The BT 32 Registers of Passenger Lists date from 1906 onwards.

Whilst prearranged immigrant schemes such as the 1820 Settlers and others are well-known these passenger lists are inconsistent and full of errors.

Around the time of the 1881 census was the tail end of the 2nd Industrial Revolution these were some of the aspects which changed people’s lives and made them immigrate.

the growth of cities and other population shifts

impact of inventions on life

living conditions in the cities and in the countryside

Bearing in mind the largest number of people immigrated to South Africa ever at one time was between 1856 and 1873 when tens of thousands of immigrants came from England. Most of them came to work on the expanding harbours and extensive railways systems.

From 1870 onwards emigration to the colony peaked following the discovery of gold and diamonds.

By 1870 virtually all emigrants went by steamship. Competition between the steamship companies helped, to some extent, to improve conditions for the emigrants. From about 1900 third class cabins began to replace the steerage accommodation. Accommodation was still basic, but it was a considerable improvement.

Between 1830 and 1930 over nine million emigrants sailed from Liverpool bound for a new life in the New World of the United States, Canada and Australia and South Africa. For much of this period Liverpool was by far the most important port of departure for emigrants from Europe largely because by 1830, she already had well established trans-Atlantic links essentially in the import of cotton and timber. Liverpool was also well placed to receive the many emigrants from the countries of North Western Europe. Irish emigrants first crossed to Liverpool by steamship, while Scandinavians and Russians/Poles crossed the North Sea to Hull and travelled to Liverpool by train. Liverpool’s share of the emigrant trade began to decline from the late nineteenth century as emigrants increasingly came from the countries of southern and eastern Europe. Some passed through Liverpool, but more sailed from the nearer German and Italian ports. 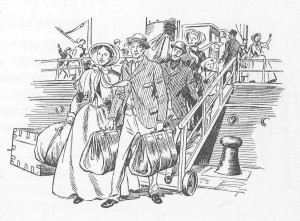 There were three main motives for emigration. Some of the emigrants were fleeing from the hardships of poverty and unemployment; this was particularly applicable to the 1,250,000 Irish who emigrated between 1845 and 1851 as a result of the potato famine. For Russian and Polish Jews, emigration was a way of escaping from political and religious persecution. Other emigrants were not suffering the hardships of poverty or the terror of persecution, but were attracted by the possibility of a higher standard of living.

Most emigrants usually spent between one and ten days waiting for their ship in a Liverpool lodging house. In the mid-nineteenth century emigrants passing through Liverpool were liable to harassment and fraud by local confidence tricksters, who became known as ‘runners’. Runners frequently snatched the emigrants’ luggage and would only return it if the emigrant paid a large fee. In the late 1840’s and 1850’s, lodging houses were often inhospitable, dirty and overcrowded.

Until the early 1860’s most emigrants left Liverpool on a sailing ship, and the voyage to Australia would take about 3- 4 months. Most emigrants travelled in the cheapest class of accommodation, known as the steerage. This was similar to a dormitory with bunks down the sides and tables in the centre. It was frequently overcrowded with poor ventilation. Emigrating in a sailing ship could be unpleasant, particularly during a storm; it was only better in degree in the early days of steamships! Diseases such as cholera and typhus frequently reached epidemic proportion as infection spread through the confined decks. Scores of emigrants died on this account.

The 1855 Passenger Act helped to improve conditions, laying down minimum standards for rations, space and sanitation. From the 1860’s the situation began to improve as steam started to replace sail, and the steamship companies started to look after emigrants during their stay in Liverpool, with their representatives meeting the emigrants on arrival in Liverpool.

The emigrants were taken to lodging houses which were frequently owned by the steamship companies, but delays still occurred and there continued to be complaints about treatment in Liverpool even in the early 20th century.

No permission, passport or application form was necessary in order to emigrate from Great Britain or Ireland in the 19th century. Only when financial assistance, from or via the government, was required, did forms of application have to be completed.

Roll of the British Settlers in South Africa by E. Morse-Jones

The Story of the British Settlers of 1820 by H.E. Hockley