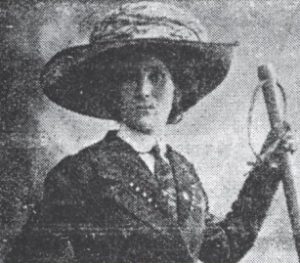 Mary Fitzgerald nee Sinnott also known as “Pickhandle Mary” was born in Wexford, Ireland on the 4th August 1885 and died in Johannesburg on the 26th September 1960, labour leader, politician, suffragette, master printer, and writer, was the eldest of the four children of Thomas Sinnott and his wife Margaret Dunn, both of Irish farming families. Mary’s father emigrated to America, from where he came to Cape Town, representing the Singer Sewing Machine Company. His family followed in about 1902. Mary married John Brick Fitzgerald, a tramwayman, and had two sons and two daughters.
Mary was one of the first female shorthand typists in South Africa and worked for the British Army at the Castle in Cape Town, and later, with her husband, moved to Johannesburg where her parents died. As circumstances soon necessitated her working again she became a typist for the Mine Workers’ Union. There was an obvious lack of co-ordination in the Union whose members were working under appalling conditions, with numerous accidents, a prevalence of phthisis, and no compensation for the dependents of deceased miners. The young Mary, who developed tremendous sympathy for them, would ride round the mines on her bicycle, carrying a collection sheet to obtain funds to bury the phthisis victims properly. At first, she accompanied Union officials who were speaking at gatherings but later began to speak herself. Her popularity with the miners developed very quickly and soon she had thousands of followers. 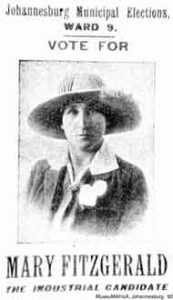 She was present at the South African Labour Party conference in October 1909, the only woman among fifty-four delegates; she was present again in 1912 when Dora Montefiore, a prominent British sociologist and suffragette, chaired a meeting to form the United Socialist Party, which did not last long. During her activities Mary encountered Nina Boyle, the leading suffragette in South Africa, with whom she developed a firm friendship, and she (Mary) became a pioneer in organising unions for women and in the fight for women’s votes and for equality of pay and opportunity. She acquired Modern Press which later printed Voice of Labour, edited by Archie Crawford, her future husband and labour leader. When Voice of Labour became defunct, they produced the Weekly Herald of which Arthur Barlow was editor, and contributed as journalist. In 1929 Mary Sinnot had to abandon Modern Press.
Her participation in workers’ strikes started in 1911 when she was involved in two Johannesburg tramway strikes. The strikers sat on tram lines to prevent ‘Blacklegs’ from working. Mounted police tried to quell the crowd in Market Square but when the police dropped their pick-handles in trying to avoid the wheel-barrows which were placed by the strikers to obstruct police horses, the crowd took possession of the pick-handles. These they carried to protest meetings, Mary becoming colonel of the “Pickhandle Brigade” and earning the nickname “Pickhandle Mary”.
Pickhandle Mary was also involved in the miners’ and general strikes of 1913 and 1914. Jammed against a wall by a police horse during the 1913 strike, she secured her release only by using her hatpin on the horse, and stood out during the strike by shouting defiance at the police and encouraging the strikers to stand firm. In another incident, she marched in the vanguard of thousands at the funeral procession of Labuschagne (shot outside the Rand Club on 5th July 1913), and at a subsequent meeting of Gen. J. C. Smuts she carried Labuschagne’s baby, railing, as she did so, against the policies and actions of the government and the mine owners. After the arson at Park Station and the offices of The Star on 4th July 1913, she was arrested for inciting workmen to commit public violence, but refused to have her fingerprints taken, and was imprisoned for six weeks before the trial at which she and Crawford were acquitted. After the 1914 strike Smuts, then acting Minister of Mines, ordered the deportation of Crawford and others, who were put aboard a ship sailing for England, Mary Sinnot followed and at a huge labour rally to welcome the ‘burner of Park Station’ it was found that she was a small, quietly spoken woman who, nevertheless, captivated her audience with a brilliant oration. Protests against the deportations followed, and the South African government rescinded the order. While in Britain, Mary gave birth to the last Fitzgerald child and later returned to South Africa.
In the first elections for the Johannesburg municipality after women had received the municipal franchise, Pickhandle Mary was elected to the city council. She served from 10th November 1915 to 26th October 1921, becoming chairman of the Public Health Committee (1915) and deputy mayor, and acting mayor (1921). On her retirement, she was presented with a motorcar bought by public subscription.
At the conclusion of the First World War Mary divorced John Fitzgerald, who although a striker, had remained un-involved during these turbulent times, and married Crawford. In 1921, she took part in a strike in Durban and in the same year was appointed by the government as an official adviser to her husband at the International Labour Organization conference at Geneva. Crawford is said to have opposed the 1922 strike. Mary took no part in it – their only child, also Archie, was born in that year.
After 1921 Mary seemed to lose interest in her union and political activities. From 1926 she withdrew almost entirely from public life and after a stroke spent her last years living quietly with her daughter.
Her career sparkles with firsts for women in South Africa: she was the first woman trade union organiser, the first woman to be imprisoned and tried for strike activities, one of the first three women to be elected to a town council. A very pretty woman with a good figure, her daring, resourceful, and courageous actions in the stirring and violent days of the early strikes earned her an image as a hatpin (or pickhandle-wielding) virago. This impression has rather overshadowed her intellectual endowment and her ability in other directions, and has tended to blot out her achievements, which were considerable.
In 1939 the city council of Johannesburg approved a motion to name the wagon site at the Newton market the Mary Fitzgerald Square. The pickhandle she is said to have used may be seen in the Africana Museum in Johannesburg. Source Dictionary of South African Biography Vol. 5. Contact me if you need help searching your family tree 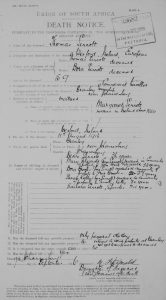