The Grave of Lady Sale

The Grave of Lady Sale

Thanks to help from Ancestors.co.za and further details and a photo in a 1986 Chowkidar journal of the British Association for Cemeteries in South Asia, Dominic Medley has found the grave of Lady Florentia Sale, a survivor of the first Anglo-Afghan War who died in Cape Town in 1853 after a gruelling voyage from India. 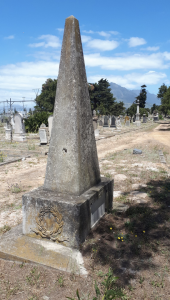 Lady Sale was an extraordinary woman. Here are just a few quotes from her much-feted diary and account of the British under siege in Kabul in 1841, the disastrous retreat and defeat at Gandamack in January 1842 and her subsequent captivity of nine months:

“I escaped the bullets that continually whizzed past me”;

“I felt very grateful for a tumbler of sherry”;

“More than half the force is now frostbitten or wounded”;

“I had fortunately only one ball in my arm”.

After more than a decade working in Afghanistan training journalists and working for the United Nations and NATO, I’d always wanted to track down more on Lady Sale. I’d read she’d been buried in Cape Town, but only in 2019 did I finally start some research. Luckily a photo and accompanying article in a Chowkidar journal from 1986 helped, in addition to a 1995 archaeological survey completed for developers by the University of Cape Town and online references especially at ancestors.co.za.

Lady Sale’s grave is at Maitland Cemetery in Cape Town. In the late 1800s and early 1900s many of the graves were moved here from the Somerset Road Cemetery on the foreshore of Cape Town as the waterfront area was developed.

The 1986 photo published in Chowkidar initially had me on the wrong tracks when I visited Maitland Cemetery. The mountain in the background is clear, as is the chapel. I’d spotted two chapels at Maitland from Google Earth satellite pictures so thought I knew where I was going, and both chapels had similar exterior designs. However, walking around the cemetery, I just couldn’t find the stone obelisk marking Lady Sale’s grave. Fortunately a cemetery official recalled another chapel being demolished (the one in the 1986 photo). Once we were on that bare ground the obelisk was easy to spot.

There’s also a photo of the obelisk, probably taken in the early 1900s at the Somerset Road Cemetery, showing the grave surrounded by iron railings. But I presume those were either not moved with the grave or since lost or stolen at the Maitland location.

The plaque is in remarkably good condition. The inscription reads:

“Beneath this stone reposes all that could die of Lady Sale. Her heroism, her fortitude, and her patience under arduous circumstances are part of her country’s story. Her piety total abnegation of self and the true tenderness of this woman’s heart are best known to the sorrowing children who raise this monument above her ashes.”

And translated from Latin:

“Mother. We shall go to you. And you will not return to us.”

Tragically Lady Sale died in Cape Town on 6 July 1853 just a few days after arriving from Calcutta. A letter to the editor of the History Today magazine in March 1960 (following an article on Lady Sale in the magazine in 1959) notes the obituary published in the South African Commercial Advertiser newspaper. Lady Sale was described as a “distinguished lady, whose imprisonment and rescue at Cabool have associated her name with one of the most brilliant achievements of the British Arms in India…”

Lady Sale was undoubtedly a remarkable woman. Her calm under fire and willingness to accept the deprivations of siege, forced march and imprisonment earned her fame and much respect.

David Loyn, former BBC correspondent in Afghanistan and India and author of Butcher and Bolt writes that when the British were collapsing:

“Leadership to the end came from Lady Sale. When Afghan weapons became available, not a single British soldier agreed to carry one, fearing the worst if they were seen armed. Morale had been crushed. Lady Sale sealed her formidable reputation when she said, ‘You had better give me one, and I will lead the party.’”

Written by and with kind permission Dominic Medley OBE – worked in Kabul from 2002 to 2018, hence his interest in Lady Sale.