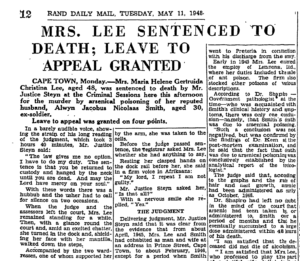 Maria Lee was a cruel and callous woman that thought about nothing except herself and slowly but surely poisoned her young lover with ant poison. 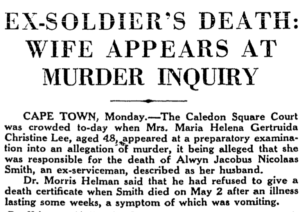 She was married four times, first when she was 16, and divorced three times. Her first husband Daniel Oosthuizen was almost double her age. One of her boyfriends, Jan de Klerk Lee, a Pretoria metalworker whose name she kept, died on 02 July 1941, allegedly his cause of death of tuberculosis. From 1946 to 1947 Mrs. Lee worked for the American Swiss firm of jewelers in Cape Town, from whom she stole jewelry worth several thousand pounds. At the time she was living with her latest lover, Alwyn Jacobus Nicolaas, a discharged soldier, who sponged on her.
When her thefts were discovered, and she was dismissed, his use as a traveling salesman for stolen jewelry ended. Mrs. Lee, who by now had made another male conquest, began to add arsenic poison to Smith’s food. He went into a decline and died on 2nd May. The doctor suspected poisoning and refused a death certificate. A post-mortem was held. Police investigations lasted months and Mrs. Lee was arrested in Pretoria on 14th October 1947.
During the trial, we learned that the relationship with Smith was showing strain and he was not a well man as he constantly had stomachache which was aggravated by his constant drinking and gambling. Local resident in Woodstock Abdul Raman attested that Smith was always borrowing money from him because he kept on losing in his games of poker.
In the Pretoria central prison, where Maria Lee was held before being remanded to Cape Town for trial, she confided to her cell companion Maria Minaar that she had given Smith doses of ant poison laced with arsenic. This woman told the police. It appears that Maria Lee had already decided that her defense would be that Smith committed suicide but she need an accomplice to substantiate the story. Maria asked Minaar to be an alibi and say that Smith had lived in Durban and he had also been ill there.

Lee by now was concocting every story she could think of and even offered to pay her cellmates bail money and further expenses if she would go to Cape Town and meet with two of her friends. Minaar did as she was asked and promptly passed the information onto Lee’s legal team and made a statement to the police on the 20th of October the day she was supposed to be released. This was the final straw for Maria Lee.

The trial was one of the longest European murder hearings in South Africa from Nov 1947 and has no less than 27 files from this case still remain in the Cape Town Archives. The case opened in Cape Town on 6th April 1947 and on 11th May 1948 Mrs. Lee was sentenced to death. An appeal was dismissed and she was hanged on 17th September 1948 and buried at New Cemetery in Pretoria. 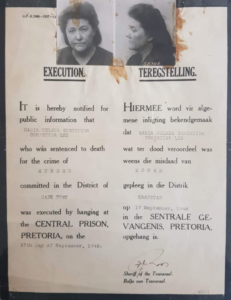