Heirlooms in your family’s possession are items or artefacts that are sometimes never spoken about or even viewed, but either hidden from prying eyes or discreetly placed in the home so as not to be seen as too conspicuous to non-family members. These items can sometimes be found listed in wills or they are simply passed down through the generations with admiration and a huge amount of trust ensuring that they do not end up on an auction or in the hands of the wrong person.

Whilst sifting through the family’s boxes of memorabilia and reading wills and fascinating books – I managed to find some wonderful examples of “Hidden Family Heirlooms”. 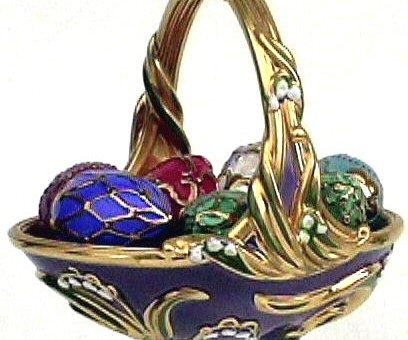 A Johannesburg resident, Mrs. Ethel Hegedus, of Melrose, owned a Faberge Easter egg which she had bought it in France circa 1947/1948 while on holiday. She was not an antique collector in the ordinary sense, but she told me, she has “a few lovely things”.

The fabulous Faberge has a direct link with South Africa during the height of fashion, his partner was a South African named Allan Bowe who, according to “The Art of Faberge”, was born in Springbok.

Henry Allan Bowe (AKA Allan) was born in Caledon on 2 December 1856, son of Thomas Bowe and Brightone Elizabeth Allen from Springbok in Namaqualand.

In 1872, when his mother died, he and his siblings were sent to an Allen relative in Devonshire and then to Switzerland. Allan eventually ended up in Moscow where he worked in a jewellery shop for an Uncle. In 1886 Allan met Faberge on a train to Paris and formed the company Faberge and Bowe and decided to sell the jewellery products in Moscow in 1887.

Shops were then opened up in Duke and Bond Street assisted by Allan’s two brothers Arthur and Charles and the partnership was only dissolved in 1906, so that he was with him during the peak of his career. Otto Jarke replaced him as manager. Jarke was followed by Andrea Marchetti, an expert in silver and gems, and by 1912 the workshops were headed by Faberge’s son Alexander, until their close in 1917. In 1917 Allan had to leave Russia due to the Revolution.

The diary of Allan was given to his daughter, Mrs. E. Tomlin of Clacton-on-Sea gave this information to a Mrs. Kuttel and Snowman circa 1950. Snowman tried to contact her in 1960 but to no avail.

He was assisted by his two brothers Arthur and Charles. Arthur later set up the Faberge Branch in London.

Allan Bowe is described as having had “a remarkable flair for organisation as well as an extremely wide knowledge of his craft”.

Faberge clearly thought well of his manager, writing in 1901, ‘My friend Allan Andreevich Bowe is my assistant and first manager – he showed himself to advantage being the manager of all my business at the Moscow factory and at the branches in Moscow and Odessa for 14 years’. A presentation tray from the Forbes collection has the dates ‘1890’ and ‘1895’, a portrait of Allan Bowe and the Roman numeral ‘V. It is inscribed ‘To the much respected Allan Andreevich from sincerely grateful employees’. Meaning of the dates on the tray remains unresolved. It is difficult to imagine what other reference this could be than to Bowe’s service, although the newspaper advertisement and the comment by Faberge referring to fourteen years make 1887 as the year he began to work for Faberge quite clear.

A silver tray once presented to Henry Bowe, the South African businessman who helped launch the famous Imperial jeweller Carl Faberge, is to go on sale here in May.

The tray is inscribed on the back with the names of all Faberge’s staff.

According to agents Phillips, who are including the piece in a major jewellery sale in Geneva, the tray is an “important and his­torical” piece and could fetch up to R80 000.

It will be auctioned together with fine jewels, Russian and European art objects, and works of art by Faberge himself.

Faberge’s work was popular in London before the firm established a branch in the city. Queen Victoria first purchased jewellery from Faberge in 1897 and Queen Alexandra, sister of the Tsarina Marie Feodorovna, collected Faberge from the 1880s onwards. Prominent members of English society were also aware of the firm. Victoria Sackville, later Lady Sackville, purchased a Faberge flower study on a visit to Russia in 1896 and recorded in her diary that ‘you meet just everyone at Faberge’. Recognising the demand for its work in England, Faberge’s representatives began to make sales trips to London in 1901. In response to the success of these trips, Arthur Bowe, an employee of Faberge’s Moscow branch named established a permanent branch in London in 1903. Bowe was an Englishman, of South African descent, whose brother Allan was Carl Faberge’s partner in Moscow. Bainbridge states that Bowe set up business in the Berners Hotel, at 6 and 7 Berners Street. Little is recorded about the branch and it is not known whether Bowe merely stayed at the hotel or if he had an office there.

Apart from the Russian royal family, the firm of Faberge had other regal clients. Other royal families placed orders for the expensive novelties made by Faberge and his firm, including King Edward VII, who bought birthday presents for Queen Alexandra from Faberge.

Many years ago a silver beaker, made from 19th century Cape Rix Dollars, was owned by a Mr. S. Dyer of Ferndale, Randburg. His great grandfather was a slave-owner at the Cape. When his slaves were liberated and he received compensation he was one of the many who were “aggrieved at the meagre sum paid to them”.

To commemorate the “injustice” he sent the silver rix-dollars he received to Holland and five beakers were made from the coins – one was given to each of his sons. These items are hallmarked and bear the family initials and still remain in the family’s possession.

A historic ring that once belonged to Marie Antoinette belongs now to a Mrs. Viner of Greenside, Johannesburg. This ring was given by Marie Antoinette to a member of her Royal Bodyguard 215 years ago.

The story goes that on the 10th August 1792 the mob attacked the Tuileries and overpowered the Swiss Guards defending the apartments of Louis XVI and his 37 year old wife. Only six guards escaped and one of them was Captain Jean Henri Nicholas Jacques, a Swiss surgeon attached to the Royal Bodyguard.

Captain Jacques found refuge in England and took with him the treasured memento of the ill-fated Queen who presented the ring to him some time previously “for services rendered”. The ring bears the Royal Crest and the motto “I cherish the wound”.

On his arrival in England Captain Jacques changed his name to James and obtained a commission in the Coldstream Guards. A few years later he married an English girl and so the ring has been handed down through successive generations on condition that the ring should never be sold “except for bread”.

One of the most interesting and historic dolls in South Africa is that in the possession of Mrs. Daisy Durham, of Dundee, Northern Natal, as an heirloom. It belonged to Queen Victoria when she was a child, being one of a number she owned and liked to make clothes for. It came to South Africa as a present for Dr. Barbara Buchanan through her uncle, Herbert Buchanan, who held an official position in Kensington Palace, where Queen Victoria was born.

When the palace was being prepared for the residence of Queen Mary’s parents, and certain of Queen Victoria’s toys were selected to be kept on exhibition, this particular doll was rejected as the clockwork had ceased to function.

Mr. Buchanan then became the owner of the doll, passing it on ‘to his niece, who, in turn, passed it on to its present owner, Mrs. Durham, who is the great-niece of Dr. Barbara Buchanan. The doll has a china head, and when wound up it could walk two or three steps and could say, “Mamma, Pappa”.

The clothes worn by the doll were made in 1915 by the wife of Mr. Herbert Buchanan when she was 73, and were modelled on some worn by King Edward VII’s eldest daughter in her infancy.

Antiques and Bygones by Dennis Godfrey