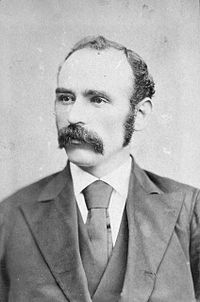 Michael Davitt an Irish nationalist politician and soldier was born on 25 March 1846 in Straide, County Mayo in Ireland. He was the son of a peasant farmer, but the family moved to Lancashire, where Michael started work in a cotton mill at the age of ten. The following year he lost an arm in a factory accident and was sent to school. From his 15th year he worked as a newsboy. In 18-70 he was arrested for smuggling arms to Ireland and was sentenced to 15 years’ hard labour. He was released after serving 7 years. Rejoining the nationalist ranks, he served intermittent sentences for political offences. Although elected to the House of Commons on several occasions, he was unseated owing to these convictions. However, in 1895 he took his seat for West Mayo, but resigned in 1899 in protest against the Second Anglo-Boer War. He visited the Boer republics early in the next year, met their leaders and attended the last session of the Transvaal Volksraad in May 1900. He was tremendously impressed by the dignity of the members in the face of disaster. Among his works is The Boer fight for freedom (1902), a wide-ranging narrative of the war, which he dedicated to Gen. Philip Botha, whose camp at Osspruit in the Orange Free State he visited. He died in Dublin on 31 March 1906.

The Michael Davitt Papers, held in the Manuscripts & Archives Research Library at Trinity College in Dublin, are a rich source for historians of late nineteenth-century Ireland. Davitt, a Mayo-born man of humble origins, was one of the leading political figures of the day. He exerted a significant influence over popular opinion, as an author, journalist and public speaker in Ireland, Britain, and internationally. For many years, Dr Carla King has studied this rich collection, in preparation for her newly published study, Michael Davitt After the Land League. Here she reflects upon Davitt’s life, the provenance of the Davitt papers, and the invaluable insights which the collection offers to researchers.