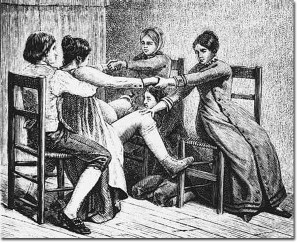 The first White baby was born at the Cape to the wife of the sick-comforter Willem Barentz Wijlant on 6 June 1652. At the time an epidemic of a serious type of dysentery affected many of the available helpers, but of the three women who were not ill, the wife of Adriaen de Jager, the first senior surgeon at the Cape, probably would have assisted at the delivery. Such married women with experience in deliveries were the midwives of the day, and it is recorded that the gates of the Fort were opened at 4am on 4 September 1660 to admit the midwife and other women to assist the wife of Abraham Gabbema at the birth of her son. That it was customary for Europeans to have help at the time of childbirth is clear from the surprise of Van Riebeeck at a delivery near the Fort of a Hottentot woman ‘without assistance from man or woman’. She cleaned the child herself, rubbed it all over with cow-dung and put it to her breast.

19th century
This contrast between the European and the indigenous population continued with little change for more than two centuries, except that the Dutch East India Company always endeavoured to provide sworn midwives in Cape Town and that, during the second British occupation, in 1807, further control regarding competency of midwives was instituted. The same was done for doctors and apothecaries. That this control was necessary is clear from the fact that there was at that time no sworn midwife in Cape Town and ‘any Hottentot woman, free woman of colour, and even slaves, presuming to act as midwives’, might do so. This led to ‘extensive evils and frequent misfortunes’.
In 1810 Dr. J. H. Wehr, a qualified man interested in obstetrics, was appointed colonial instructor in midwifery. At his instigation the Midwifery School was established by the Earl of Caledon, this being the first professional school of any kind in South Africa. Seven pupils qualified in 1813, having been well trained both from the scientific aspect and regarding the moral and social significance of the work of the midwife. The custom was then, as in many places still today, that the midwife should manage normal confinements and call in a doctor at any complication. 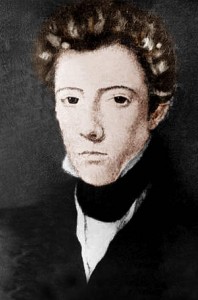 First Caesarean section
On 25 July 1826 obstetrical history was made at the Cape in what is said to be the fourth such case reported in the world, when Dr. James Barry was called in to see a Mrs. Thomas Munnik, who was in distressed labour. He performed a Caesarean section on her in her home (and there were no general anaesthetics in those days.) Both she and her baby son survived. The grateful parents named their son James Barry Munnik, a name well remembered, because James Barry Munnik Hertzog, who became Prime Minister of South Africa, acquired it from his godfather, James Barry Munnik.
Great Trek
During the Great Trek the ‘ouvrouens’ (old wives) played the same role in midwifery as they had done in the country districts of the Cape. Of particular interest is the part played by the wife of Pieter Uys on their trek. On the well-known day when the sympathetic English-speaking settlers of Grahamstown presented old Jacobus Uys with a Bible, this young woman was given much valuable advice by Dr. John Atherstone on how to cope with problems in childbirth. Being impressed by her courage, he also gave her a considerable quantity of medicines.
Registration of midwives
It would appear that South Africa was to a certain extent spared some of the bitter friction between doctors and midwives in the handling of obstetrical cases. In Europe, at the beginning of the 16th century, doctors were still rigidly excluded from the birth chamber. During that century, however, Ambroise Paré, a great French surgeon, and William Chamberlen (both Huguenots), who devised the obstetric forceps, made major contributions to the practice of obstetrics, which brought the doctor into this field. This, however, rather accentuated the friction, which lasted until about the end of the 19th century. The small number of doctors and midwives was probably one reason for the lack of obvious friction in South Africa, and at the time when the matter might have come to a head the country was blessed with nurses and doctors possessing such insight that South Africa became the first country in the world to introduce State registration of midwives (1891).
The prime mover seems to have been the great Sister Henrietta Stockdale of Kimberley, who interviewed Dr. W. G. Atherstone, chairman of the Cape select committee on medical reform, insisting that ‘this country needs properly trained and qualified midwives, intelligent women who are able to lay the foundation for a healthy nation’. All the medical men in the Legislative Assembly gave this part of the Bill their unanimous support.
Wise men and women in the medical and nursing professions have assured progress in the field of obstetrics, so that today there is teamwork instead of friction. This is shown not only in the sphere of practical medicine, but also by the fact that there is representation of nurses on the South African Medical and Dental Council and of doctors on the South African Nursing Council.

Daughter of P.J.B. Marais (deceased) and Mrs. Marais. Born at Hanover, Cape Province, and educated at the Girls’ High School, Cradock, C.P., and Oranje Girls’ School, Bloemfontein, O.F.S. Matron of the Rietfontein Hospital, Transvaal. Qualified as a general nurse at the Diakones Hospital, Cape Town, in 1922 and as a Midwife at the P.M. Hospital, Cape Town in 1922. Also did Fever nursing at the Congella Hospital, Durban. Also holds the following certificates: Mental Nursing, Valkenberg, Cape Town; Mothercraft, Lady Buxton Home, Claremont Nurse for Feeble-minded, Alexandra Institution, Cape Town; Sanitary Inspectors Certificate of the Royal Sanitary Institute, London. Was Sister at the Alexandra Institution for two and a half years and was then transferred to Rietfontein Hospital as Matron in 1931. Member of the S.A.T.N.A. since 1922, member of the National Committee of the Florence Nightingale Foundation, South Africa. Her address is Rietfontein Hospital, Orange Grove, Johannesburg.

School of midwives
The foundress of modern midwifery education in South Africa was Mary Hirst Watkins, who trained under Sister Stockdale, Sister Catherine Booth and the local doctors at Kimberley. She established the school for midwives there in 1893. Her work was well known not only in South Africa but also in England, where she was offered an appointment in 1905. The letter reached Kimberley on the day she died.
First beds for midwifery
The first beds were set aside for midwifery cases in Albany Hospital, Grahamstown, in 1858. The Provincial Hospital, Port Elizabeth, admitted their first ‘accouchement case’ in 1865. Because these cases were complicated deliveries, the authorities found it necessary in the course of time to provide beds for emergency midwifery cases of an abnormal nature. This arbitrary division between normal and abnormal cases (the normal for a long time apparently being no concern of the authorities) has been responsible for many deaths of mothers. In addition, the division of responsibility in South Africa between the central government and the provincial administrations has proved a most unfortunate one, more so in obstetrics than other fields of medicine, as at first the provinces were given the responsibility for abnormal obstetrics only. As a result there has been much delay in providing for ‘normal’ cases, which may become seriously abnormal in a matter of minutes.
Maternity hospitals
The centres in which maternity hospitals have been established have mainly been the centres where medical schools are situated, as this is essential for the training of medical students and midwives (and from a later stage the nurses completing an integrated general nursing and midwifery course). The best-known of these are the Peninsula Maternity Home in Cape Town and the Queen Victoria Maternity Hospital in Johannesburg. In Pretoria the old Moedersbond Hospital was taken over by the Province and is now part of the H. F. Verwoerd Hospital complex. At Groote Schuur Hospital in Cape Town a large maternity block was added in 1961. In other centres obstetrics is dealt with as a section of a general hospital, not infrequently as a separate block.
The first non-White obstetrical case given hospital treatment in South Africa was admitted to Grey Hospital, King William’s Town, in 1872. The previously disadvantaged now also receive top obstetrical care at large maternity sections at hospitals, such as King Edward VIII Hospital in Durban and Chris Hani – Baragwanath Hospital in Johannesburg, where many thousands of deliveries are done each year.