Secret Society in the Parliament Precinct

Home/Secret Society in the Parliament Precinct
Previous Next

Secret Society in the Parliament Precinct 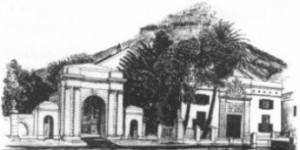 Governments rise and fall, but one thing remains constant in the precincts of Parliament in Cape Town: 235-year-old Masonic lodge. Few know that an old and venerable temple of the ancient and mysterious brotherhood of Freemasons exists in the parliamentary complex. But De Goedehoop Temple was built long before Parliament.

The Freemasons can claim high-ranking politicians as members, from as far back as the Cape Colony, the South African Union and apartheid eras until the present day.

The MPs have been able to go straight from Parliament to attend the ceremonies of the order. But the Freemasons are not saying who they are.

Freemasonry has its roots in the Middle Ages and was introduced in South Africa in the 18th century. Rumour has it that the Freemasons sold the land on which Parliament stands to the Government for £1 on condition that should Parliament move, the land had to be sold back to the Freemasons for the same price – about R2 then, about R14 today. If the urban legend were true, the Freemasons would own Parliament if it were to move to Gauteng. But like all urban legends, it has little basis in fact.

Master of the Sea Point Lodge, Vivian Zaayman, who has been a Freemason for 40 years, said it was just a rumour. However, the Freemasons did sell the Government the land on which the old President’s Council building was situated. It is now used for other parliamentary purposes. Mr. Zaayman said the lodge at Parliament, known as De Goedehoop Temple, was built in 1772 when masonry was established in the Cape, and is a national monument.

The building is the Cape Town Freemasons’ headquarters and home to 23 lodges in the Western Cape. Meetings are held daily. Mr. Zaayman said there were about 10 000 Freemasons in South Africa. They came from various religions, cultures and races. He said Freemasonry was a way of life for men of all nations. It reinforced kindness in the home, honesty in business, courtesy in society and fairness in all pursuits. Its teachings fostered personal growth of character and encouraged Freemasons to become better citizens.

South African Freemasons have included Cecil John Rhodes, General Louis Botha, CJ Langenhoven and Ernest and Harry Oppenheimer. Mr Zaayman said Freemasonry was not a secret society that conducted bizarre rituals. All ceremonies were conducted in a dignified manner and were held in private because masons wanted to keep the rituals pure, locking out the profane world.

Members wore their best suits at the ceremonies. One of the most important ceremonies was the initiation ritual; however, Mr. Zaayman refused to divulge any more details. He said a Freemason could go anywhere in the world and be welcomed as a brother at any Masonic lodge.

To be eligible to be a Freemason, a man had to believe in a supreme being and be of good character. Before he was accepted, his background was thoroughly investigated. Women were not normally allowed to enter Masonic temples or to become members, the only exception being on annual open day when wives of Freemasons are allowed into the lodges. Do you want to become a Freemason? find out here.

Famous black South African masons include Thabo Mbeki and Desmond Tutu – as far as I know Jacob Zuma is not a mason.