[facebook]
[twitter name=”name”]The Blue Books in the Cape Town Archives are one of the hidden gems that you can use in tracing your family history. I have found my great grandfather Richard Woodland in the 1883, 1884, and 1885 Blue Books. The first two he is with the Customs Department, and in 1885 a pensioner from that Department. He was appointed to the Customs Department in 1882 but there is a note to say he entered the Colonial Service in 1870 and before that was Constable at the Breakwater Convict Station 1865-1870. This  confirmed on his marriage certificate in 1855 that he was a police constable and later correspondence in the CO books when he got promoted from the Breakwater Convict Station. They do not only contain statistical data but also names of people in many instances. The British authorities at the Cape in the early nineteenth century set about the governance of a collection 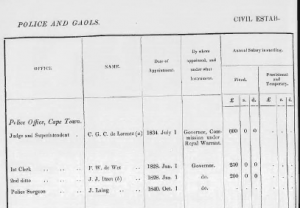 of disparate and heterogenous people in the colony as if it were a typical colony of British settlement. In retrospect the determination to impose metropolitan norms of capitalist and parliamentary development on so different a social order might appear remarkable; in fact the options open to the British were limited, given the changing basis of the British state itself and of its imperialism. The statistical data for the Cape of Good Hope, within our holdings, becomes available from this period onwards; with Blue Books themselves reproduced here commencing from 1821. These Blue Books contain data regarding the following areas: Civil Establishment; Taxes; duties and other heads of revenue; Fees(personal); Revenue, Expenditure and Balances; Comparative statement of revenue (1873, 1874), expenditure (1873,1874), estimated and actual revenue, estimated and actual expenditure; estimated and actual expenditure under schedules, ordinances, and Acts of Parliament; an Abstract statement under appropriation ordinance etc; General Account – Current; Local revenues (Church, Municipal, and Divisional Council); Public Debt; Military; Public Works and Buildings; Legislation; Political franchise; Council and Assembly; Security for Discharge of Duties; Pensions; Recapitulation; Foreign Consuls; Population; Miscellaneous Numerical Return; Ecclesiastical Return; Education; Money, Exchange, Weights and Measures; Shipping/Exports and Imports: Agriculture; Wages etc; Prices of Provisions and Clothing; Stock and Produce; Manufactories, Mines and Fisheries; Grants of Land; Jails and Prisoners; Charitable Institutions and Hospitals; the appendix contains Reports of Civil Commissioners. Description drawn from Shula Marks’